(SPOILER ALERT: This article contains details about Seasons 6 and 7 of “The Walking Dead”. Read at your own risk!)

Season 6 of The Walking Dead introduced Rick (Andrew Lincoln) and his group of survivors to a larger world beyond Alexandria’s walls. Within this larger world, lay a farming community 20 miles outside of Alexandria’s safe zone and deep in the heart of “Saviors” territory. The group’s discovery of Hilltop would initiate a sequence of events that Rick would later come to regret, all starting with a fateful meeting of new world survivors, where we would learn the name “Negan” and the threat he posed to everyone.

Enter Andy (Jeremy Palko), a Hilltop resident who is all too familiar with Negan (Jeffrey Dean Morgan) and his Saviors. Andy was part of a group that regularly delivered supplies to the Saviors in exchange for Hilltop’s security from their attacks. He had witnessed the brutality of the Saviors firsthand, and he knew where to find them.

After learning of this new threat, Rick made it clear that he wanted the Saviors, and this so-called “Negan,” gone. He pledged to eradicate the Saviors personally, and enlisted Andy’s help in planning an assault that would kick off a chain reaction that would lead to the horrifying consequences meted out in the first 20 minutes of Season 7, Episode 1.

The Recap Sequence reached out to Jeremy Palko to learn more about his character, his interactions with the cast on and off-screen, and being part of one of television’s biggest shows ever!

Were you a fan of the TV series or reader of the comic before being cast as Andy?

I actually auditioned for the Pilot episode of The Walking Dead, so I kept up with the first two seasons then kinda fell off. But once I was cast I spent a week catching up and really got hooked with everything “Walking Dead”.

Once I was cast, I immediately looked up “Andy” in the comics. I was disappointed to see that Andy was merely mentioned in the comics as being killed by Negan. I thought I was going to have a very short shoot, but  was happy to see that they didn’t stick that closely to the comics regarding my character. “Stay alive” is the name of the game in this show! 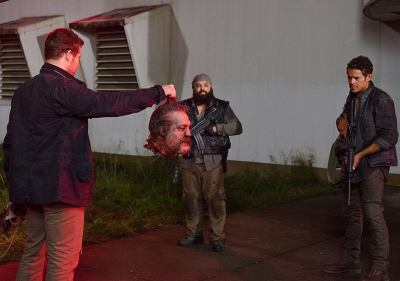 In  one episode, Andy says “The Saviors, they’re scary, but this prick’s got nothing on you“.  Do you think Andy saw Rick as a match for Negan? Or do you think he knew Rick was about to learn a hard lesson?

I believe he absolutely saw Rick match Negan’s crazy in that moment. Andy, I believe, puts on a tough front, but as we see in his encounter with the Saviors at the outpost, we know he does fear Negan – more than Rick’s group, so maybe he kind of expects a lesson to be learned from the Saviors. I mean, after all, Daryl broke his arm and killed his friend at Hilltop. Maybe Andy is pissed? Notice he didn’t hesitate to leave once Jesus told him to go back!

In the episodes you appear in, the majority of your scenes are with principal characters. What was it like filming your scenes with Norman Reedus, Andrew Lincoln, Steven Yeun and Michael Cudlitz?

These guys were beyond cool! I may have been starstruck for a moment, but that’s only because I love acting and am a fan of so much of their work. But getting into character in the middle of nowhere (Senoia, GA) really helped to get back to that feeling of being in an apocalypse. And when you work with some of the best actors in Hollywood, you have to get your stuff together and focus up.

My first day on set and my first scene was with Andrew Lincoln and involved an intense stare down. I fumbled the first two takes I think. Norman kinda calmed me down and it was just pure fun after that. But, it was and is an honor to share the screen with these guys and girls, not only for my career as an actor, but as a fan of the show as well.

What do you enjoy most about being part of The Walking Dead?

The fans! The following is unbelievable and I am so humbled and honored to be a small part of this amazing show. It has opened so many opportunities to travel and do comic cons all over the place. Traveling has been exhausting at times but completely worth it to meet so many amazing people!

Tell us about your role as Nicholas on Netflix’s Bloodline.

“Nick the Dick”! Such an amazing show to be a part of. Nick is a Stanford educated spoiled brat, which meant I got to do some very heated scenes with the amazing Norbert Leo Butz. Wishing they would have brought Nicholas Widmark back for season 2…but who knows what will happen in season 3! Fingers crossed. I really enjoyed playing him and driving a really expensive Porsche around the Florida Keys…not a bad office.

What other projects can we see you involved in, past, present and future?

So Dark (www.sodarktheseries.com)! Check it out! After 2 successful short films, we have received funding to start Episodes 2 and 3 in January. I play Sean, a 200 year old vampire who only preys the vicious. Think Dexter with a twist of Lost Boys.

The midseason finale of Season 7 of The Walking Dead airs Sunday, December 11th on AMC, and don’t miss the third installment of Speaking of the Dead, presented by The Recap Sequence Wednesday night at 9PM local/8PM Eastern on CHSR 97.9 FM or online at http://www.chsrfm.ca.